Kareem Omar Mohammed Nufal, 15, writing from Beit Hanoun
Kareem, 15, is a ninth grade student from Beit Hanoun, in the north of the Gaza Strip. He writes about his longing to go back to playing football, his great passion before the injury, and the efforts to try to get back to normal.
Kareem’s family house in Abraj Al Awda neighborhood was in the line of fire. Consequently, when the bombing started, the family moved to a safer nearby house in the area. On 21 July 2014, a Monday, together with his two siblings and father, Kareem had to return to the family house to bring food. When they were inside the house, a first missile struck. When they fled and tried to leave the house, a second missile struck, whose shrapnel injured Kareem.
Kareem was evacuated by ambulance to Shifa Hospital, where the doctors amputated his left foot. Because the hospital lacked the medication and equipment required for treating him, Kareem was transferred by the Red Cross to a hospital in East Jerusalem. At Erez Crossing he was put through a rigorous security check. “They even checked my hairs”, he said.
Kareem waited many long months for his prosthesis—from his hospitalization in July to November. In November 2014 he went to Slovenia to have an artificial limb fitted. Despite Kareem’s young age, his father was not allowed to escort him. 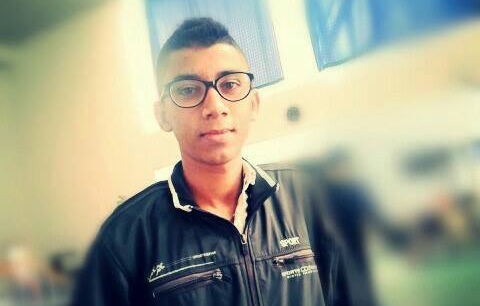 Gaza-Amputees blog brings the voices and experiences of Palestinians injured during the war on Gaza in summer 2014. The blog follows 8 amputees as they struggle to cope with the amputation from the time of their injury to the present, in both medical and rehabilitation terms and in everyday life.